All glories to the most beautiful and lustrous Shri Radharaman, the three-fold bending posture of whose soft and shining form submerges the hearts of all the devotees gazing at his smiling, playful, ever fresh and ever youthful face, which puts to shame the beauty of millions of lotus flowers, into an ocean of unprecedented transcendental […] 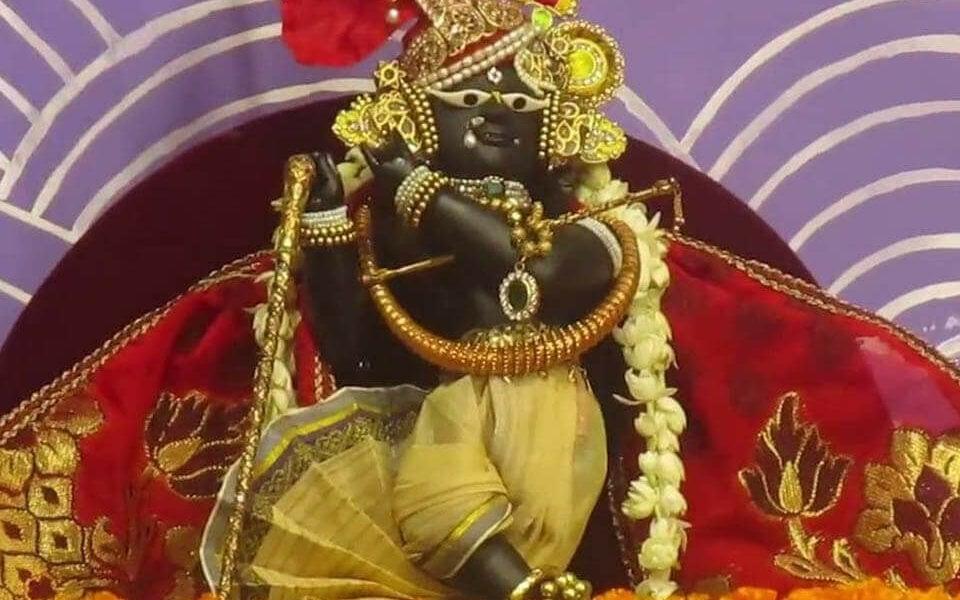 All glories to the most beautiful and lustrous Shri Radharaman, the three-fold bending posture of whose soft and shining form submerges the hearts of all the devotees gazing at his smiling, playful, ever fresh and ever youthful face, which puts to shame the beauty of millions of lotus flowers, into an ocean of unprecedented transcendental bliss. His exquisitely beautiful and enchanting lotus like eyes, his arched eyebrows, his gorgeous nose and mischievous broad smile churn the hearts of the devotees with love. His lotus like face, which is said to be like that of Shri Gopinath, profusely oozing with nectar that draws the bumble bee minds of the devotees to him, desirous to relish his beauty which is sweeter than the sweetest honey. His broad and sturdy chest, the resting place of all the goddesses of fortune, tapers down to his thin waist, from which no one is able to remove their eyes, and the lure of his deep, enchanting navel, which cannot be described in words, is likened to the form of Govinda dev. And his charming legs and delicate feet, which are the solace of the living entities burning in the forest fire of material existence, resemble those of Madanmohan. In this way, Radharaman, the most ravishing and gorgeous manifestation of Krishna in the form of a deity, is the combination of the three most prominent deities, namely Madanmohan, Govinda dev and Gopinath. Adorned with beautiful garments and jewels, Radharaman, the one who is enjoying pastimes with Shrimati Radhika, rules over everyone’s heart.

On Vaishakh Purnima, which is tomorrow, the appearance day of Radharaman is celebrated in Shridham Vrindavan with great splendour and enthusiasm. It is on this day that the Lord manifested his, this most attractive, form for the pleasure of his dear devotee Shrila Gopal bhatta goswami.  This most intriguing story, of how the lord is always desirous of fulfilling the desires of his devotees, starts when one of the six Goswamis of Vrindavan, Shrila Gopal bhatta goswami, who had the good fortune of serving Mahaprabhu in his childhood when Mahaprabhu stayed in his parent’s house for chaturmasa during his tour of South India, goes to the river Gandaki in the Himalayas before coming to Vrindavan, as per the instructions of Mahaprabhu, who told him to serve his parents till their departure from this material world and thereafter go to Vrindavan. When bathing in the Gandaki, twelve Shaligram shillas entered the bathing pot that Gopal bhatta goswami was using. He placed the Shilas back in the river as he was not willing to take them with him, but when the same incident occurred thrice, he understood that the Lord wanted him to serve the Shaligrams and therefore he brought them with him to Vrindavan, where he served them with great love and devotion while residing in the association of Shrila Rupa goswami and Sanatan goswami. After some time, a wealthy man came to Vrindavan and wishing to render some service to the Vaishnavas, donated gorgeous garments and jewellery to Shrila Gopal bhatta goswami to use in the service to his deities. However, due to the shilas being round and not displaying the fine features of the Lord, he was unable to utilize these gifts in the service of the lord, and was therefore remorseful, thinking of how it would be so wonderful if he had a deity of the Lord, whom he could dress and adorn with jewels. He spent his entire time contemplating the beautiful form of the Lord and how he would feel very joyous at heart if he could serve a deity of the Krishna. Meditating thus on this matter, he went to sleep. The next morning, when he opened the bag, in which he used to keep his Shilas, to worship his Shaligrams, he saw, that instead of twelve, there were only eleven, and that the Damodar Shila had transformed into an exquisitely beautiful deity of Krishna, resplendent with charming features. He immediately told Shrila Rupa and Sanatan goswami of what had happened, and being overjoyed everyone bathed Radharaman with tears of love and devotion. In this way the lord manifested himself for the pleasure of his dear devotee, who then dressed and decorated the Lord with the garments and jewellery that he had received, thus feeling immense satisfaction and pleasure in his heart.

The worship of Radharaman is, till the present day, being carried out upholding the highest standards, since the time of Shrila Gopal bhatta goswami, by his followers. Shrila Gopal bhatta, who is the author of Sat kriya sar deepika and Hari bhakti vilas, gaudiya literatures describing about deity worship and the different sanskaras, set high standards for the worship of his beloved Radharaman which is still being carried out by the present day goswamis. Radharaman is served and taken care of with utmost care and affection in accordance with the season and the various pastime of the Lord. Various bhajans, suitable to the time of the day and the pastimes that the Lord performs at those times, are sung by the devotees for his pleasure. His form, the beauty of which is unparalleled, is adorned by various decorations, which make him appear even more splendid. When Shrila Prabhupad was establishing the Krishna Balaram Mandir in Vrindavan, he instructed his disciples to go and learn deity worship from the goswamis of Radharaman and follow the standard of worship being followed there.

Praying at the lotus feet of Radharaman on this auspicious day of his appearance, we hope that one day out of his cause less mercy, he will make his divine appearance in our hearts and fill them with Krishna prem. May we all remain forever enamoured by his most enchanting three fold bending form, that puts to shame the beauty of millions of sapphires and is more delicate and soft then butter tinged with the hue of blue lotuses and may we be blessed with loving service to his lotus feet, which would make our lives successful.

STAY IN THE LOOP